Film production in our community can have a significant economic impact. Below are some of the economic impact numbers from a number of recent productions that filmed here in Rockdale County.

A young kid teams up with the daughter of young adult horror author R.L. Stine after the writer’s imaginary demons are set free on the town of Greendale, Maryland. Conyers, Georgia stood in for Greendale along with Madison, Georgia. Main production offices were located at a leased building here in Conyers, which included sound stages and exterior sets. The production employed over 400 people during filming.

This popular CW production is ready to start filming season two in Olde Town Conyers as well in their sound stages located here in Conyers where they also have their production offices.

Set in the early 1980s, this series dramatizes the personal computing boom through the eyes of a visionary, an engineer and a prodigy whose innovations directly confront the corporate behemoths of the time. The production company used two residents homes in Conyers as sets for two of the series character’s homes in the first season.

Constantine is an upcoming television series to air on NBC, based on the characters appearing in the comic series Hellblazer published by DC Comics under their Vertigo imprint. Constantine has already filmed scenes in Olde Town Conyers and Costley Mill Park and will also be filming on Miller Bottom Road. The series is set to air October 24, 2014.

This HBO movie is the story of legendary blues performer, Bessie Smith, who rose to fame during the 1920s and ’30s. Olde Town Conyers was converted to 1920’s Chatanooga for filming.

The Sunday Horse movie is about a determined rider from the wrong side of the tracks, who after a near-fatal accident, on a horse the experts thought was nothing special, defies all the odds to pursue her dreams of winning a national jumping championship. The production company spent one week filming at the Georgia International Horse Park as well as the Rockdale Medical Center and numerous horse farms in Rockdale County.

Selma, an upcoming American drama film directed by Ava DuVernay. The film is based on the 1965 Selma to Montgomery voting rights marches led by James Bevel, Hosea Williams, and Martin Luther King, Jr. of SCLC and John Lewis of SNCC. Principal photography of the film began on May 20, 2014 in Atlanta with courtroom scenes shot in Conyers and Rockdale County in the Superior Courtroom of Judge Mumford. The film will receive a limited release on December 25, 2014, before opening wide on January 9, 2015.

This new USA Networks TV series will be filming scenes at Rockdale Medical Center in the middle of September. 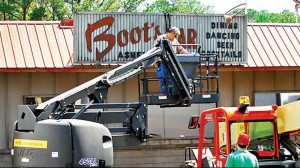 In addition location fees paid to property owners provided additional personal /disposable income that was available to be spent in our community.

We also hosted an open casting call for extras at the Rockdale Career Academy where more than 1,000 people came to our community.