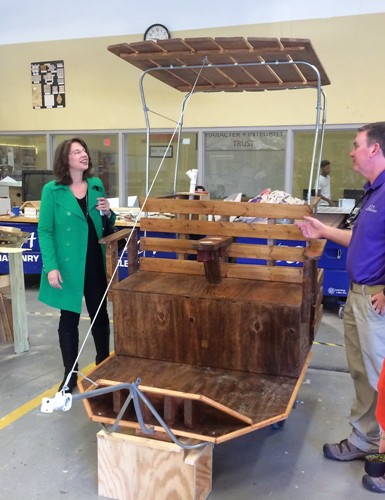 Warner Bros. Entertainment executives toured RCA on March 23, which ended in a generous surprise donation from the film and television entertainment giant.

Dual pathway student Taylor Le impressed Michaels with a spontaneous explanation about one of her projects that went from concept and design in Architecture to an actual build she completed in Construction.

Trish Standard stopped and spoke with several students in class about her journey and work as a producer. Standard, who studied Graphic Design at UCLA, impressed the Graphic Design students by discussing their work and even had a student do an impromptu audition in Construction. She spoke to students about the value of “showing up, being on time, and not complaining” – advice from a real producer that the students soaked up. Standard also offered to host three top broadcast video production students for lunch and conversation at her office.

At the end of the tour, Mary–Elizabeth Michaels presented RCA with a $4,000 check, to the surprise and delight of RCA board members and leaders.

RCA CEO Miki Edwards said the timing of this gift couldn’t be better as it would help send students to national competitions. “We cannot thank Warner Bros. enough for their support,” said Edwards. “We are grateful for their genuine interest in seeing our students succeed and graduate with an advantage in careers and in life. Not only did they invest in our programs, but they took the time to share their insights and experiences with our students, which is priceless.”