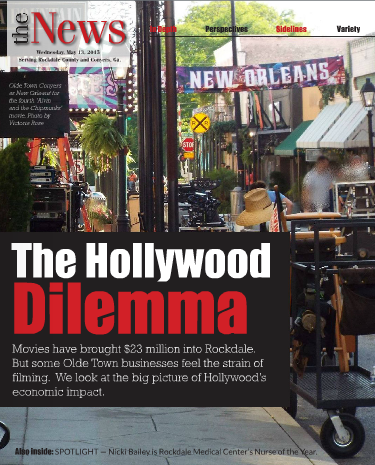 On one hand, the revenues brought in by production companies pumps money into the local economy – more than $23 million over the last five years – and helps the tax base.

On the other hand, some of the merchants in film locations notice a significant drop in business, especially when streets like Commercial and Center in Olde Town Conyers, are closed.

At a recent Conyers City Council meeting, several Olde Town business owners complained about the loss of business during the filming of “Alvin and the Chipmunks” in early May. They said filmmakers filled up the Olde Town parking lot and scared off customers.

“The disrespect and disregard we’re getting as merchants, I’m disgusted with it,” Clay Amyette, owner of Treasures and Trash antiques, told the council. A proposal was made to add a merchant onto the film policy committee.

“We’re sensitive to [the problem],” said Gina Hartsell, Film Liaison for the Conyers/Rockdale Economic Development Office (CREDO). “A lot of producers film at night so they don’t impact merchants.”

Council Member Vince Evans owns property in Olde Town and said that some of the people who lease space from him aren’t thrilled with filmmaking in Conyers. Others are find it exciting.

The biggest area of concern is Olde Town Conyers because of the way the area is laid out. Covington, Evans said, has a square with multiple entrances into it. Olde Town Conyers is more challenging, with Center Street being the preferred area for shooting, Hartsell said.

“There is no easy way to close Center Street for filming,” she said. “Often the companies want to film in the alley and we close Commercial Street to Center. Producers like to film in Olde Town beccause it’s contained and can be closed off. They can control the situation.”

Hartsell recognizes that the city and county is constantly still learning what works and wasn’t doesn’t. “People point to neighboring cities, like Covington and Senoia, and how well it’s working there, but those cities spent a lot of time making it work. They change policies frequently, as we do.”

One of the issues raised was parking. City Council Member Cleveland Stroud said, “We have to solve the problem of parking. That will eliminate most of the problems we’re having, though that’s not a guarantee.”

“Parking is an issue, but I think it’s just part of the issue,” Hartsell said. “On Center Street, the merchants have no visibility and when their street closes, they get little drive by trade.”

The City has policies in place about street closures and parking. Fees for closing a street are $500 per street per day for feature films and $250 per street per day for TV series and other filming requests. Production crew and cast are limited to 50 percent or less of the space at the municipal parking lot, and can negotiate with local churches, schools and government offices for permission to use those parking lots.

A once vacant lot, where the Stevenson Garage once sat on Elm Street, has been used as a makeshift parking lot by the industry for trailers and trucks. Gravel will be spread over it when the construction along Railroad Street is completed.

Stroud said there is a need to look at the big picture as they council moves forward. “Some of the merchants are all for it; some, the ones who coming to the meeting, don’t,” he said. “The small window is the temporary inconvenience; the big picture is that additional customers will come to see where a film or series is made. We like to see places we’ve read about or see in in the movies.

“While they’re here, they will spend some of their money,” he said. “The inconvenience might be worth it in the long run. If there’s something we can do to help both sides, we will.”

Property and business owners are compensated by film crews for the inconvenience of having the production team, cast and extras on site. Hartsell said that last week, the “Alvin and the Chipmunks” production paid out $150,000 to owners and merchants for use of property, or inconvenience to businesses. The fees differ according to how the business or property is used.

But as the number of commercials, films and series shot in Rockdale County rises, the need for a solution that benefits everyone does too.

The city has contracted with the University of Georgia’s Carl Vinson Institute of Government to create a strategic plan, Hartsell said, “and film policies will be part of that. There is no immediate solution to the problems, but the strategic plan should address them.”

For Moulton, it’s not closing the streets that’s a concern, but the police, barriers and barrels that are set up during a shoot.

“I know they have to close the streets sometime, but they make such a big presence of police and put up barriers and orange barrels” she said. “It looks like a crime scene.

“If you come for the first time and find the streets closed, you don’t come back,” she said, adding that regulars do return. “When we had Heat of the Night, that wasn’t a problem. Everyone liked [having] them here.”

Hartsell said she has heard from some businesses that when an area is going to be blocked, their regular customers just don’t come. “But that’s true of events like Taste of Conyers or the St. Patrick’s Day parade.”

One local business that has benefitted from production companies is Still Lumber.

Owner Jason Hill said the film crews have been good to them. “They do a good job of buying locally. They’re very conscientious about doing that.”

During the recession, when housing starts were down, the construction business was hit hard, which, in turn, hurt lumberyards and suppliers. The film crews that come to town are “an opportunity for us to sell lumber,” Hill said. “You want to diversify who you’re selling to. We sell to a lot of industrial and packaging businesses and single-home builders. The film business is just another business.”

It’s a business that has grown significantly over the last decade. According to the Georgia Film Commission of the state’s Economic Development Office, over the last seven years, more than 100 production companies, including the UK-based Pinewood Studios, have located or expanded in Georgia. Films and television productions had a $5.1 billion impact on the state’s economy during fiscal year 2013-2014. That impact included more than 77,900 jobs and $3.8 billion in total wages in Georgia, with 23,00 people directly employed by the motion picture and television industry.

In Rockdale County, the increased number of studios coming to Georgia had a direct impact on some property owners, Hartsell said.

When the recession hit in 2008, she said, a lot of buildings in the city sat empty. After Georgia put its film incentives in place in 2009, the call for filming locations made it possible for property owners to rent out the large, empty warehouses to production companies.

One success story is the warehouse where East Mountain Studios is located. As production companies such as Time Warner, Paramount and Universal rented the former Takahashi plant, they installed equipment or technology, which they left behind, Hartsell said. The once empty warehouse is now one of the largest sound stages in Georgia without over 130,000 square feet of space.

She pointed to the recent Alvin shoot, which converted Center Street into New Orleans’ Mardi Gras location. The production brought in 400 extras. “That has a big impact on the economy,” she said.

Shows that filmed in Conyers last year included “Vampire Diaries,” “Investigation Discovery: Swamp Murders,” “The Originals,” “Selma,” “Constantine,” Operator,” and “Bessie.” According to the figures Hartsell collected, the approximate fees paid to Conyers-Rockdale residents in 2014 was $4.4 million, with an estimated 450,000 square feet of space leased for $1.5 million. The total economic impact on Conyers-Rockdale of film productions in 2014 is $5.9. It’s estimated that the amount will drop to $1.175 million this year.

And it’s not just extras who are hired from the local workforce by production companies. Hartsell said they welcome production companies to town, but ask that they hire locals whenever possible. Electricians, plumbers and carpenters are among the local trade work force who have been hired to work on productions.

Bonanza Productions, which produces “The Originals,” leases land on either side of their building and built a New Orleans mausoleum set. “To do that, they hired a local engineer-architect, who’s up on codes and regulations so the production company can maintain a lawful existence,” she said.

While the Chamber likes to promote chamber members, Hartsell said they will provide contact information for any type of business or shop requested.

Hill thinks the Conyers-Rockdale Economic Development group has done a good job making film companies aware of the businesses and services available locally, but he is sympathetic to the downtown businesses’ concerns.

“It’s good for Conyers to have them here-whether it’s through tourism or through the [crew members]. It’s a valuable asset for Conyers and Rockdale County,” he said. “I hope they can come up with a good solution.”

But it’s not just production crews who come to town. Tourists, some drawn to locations where their favorite series or film has been shot, also come to town, and they spend money during their visit.

According to a press release from City of Conyers, the Georgia Department of Economic Development reported that tourists spent $113.13 million in Conyers and Rockdale County in 2012. Tourism generated $4.15 million in state taxes and another $3.23 million in local city and county taxes.

The film industry definitely attracts tourists, said Jennifer Edwards, Conyers Tourism Director, “particularly with productions like ‘The Originals.’ We can see on the days when there’s filming going on, or there’s prep work going on, our [visitor] numbers are up.

“The [visitors]y do frequent some of the restaurants and stores in Olde Town,” she said. “It has a ripple effect on a variety of places in Conyers.”

Communication between the state film commission, the city, the chamber, the film companies and the public is essential, Hartsell said. “The production people now understand how important it is to share the film information [schedule, location, numbers] with the community.”

Communication between the state film commission, the city, the chamber, the film companies and the public is essential, Hartsell said. “The production people now understand how important it is to share the film information [schedule, location, numbers] with the community.”

“We’re trying to do everything we can to balance the needs of the film company against the people running business,” she said. The policies the city has put in place about film making are evolving as they learn from each experience.

“The film company will spend a lot of money,” Evans said. “When they put the balconies up in Olde Town, they used local companies to do it. It’s about spending money and about jobs that they create. We’re just trying to find that middle ground to allow the film people to do what they need to do and give [business owners] every opportunity to conduct their business as if the filming wasn’t there.

“We think we covered everything, then we find something else [that creates problems],” he said. It’s a work in progress. It’s constantly trying to figure out what’s the right thing to do.”