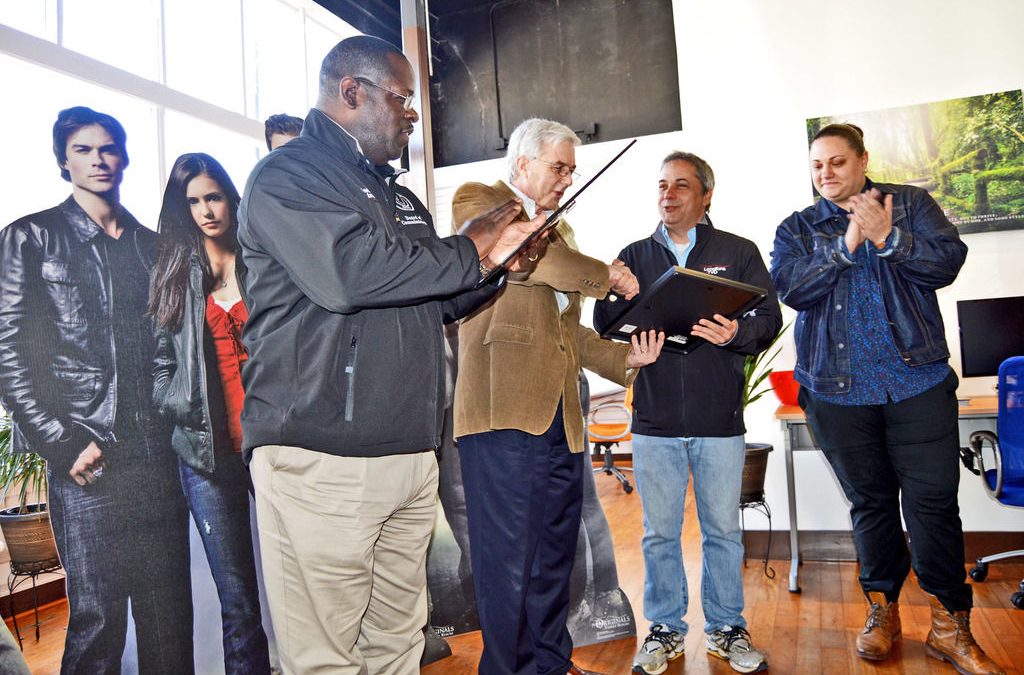 The economic impact of local movies and television production was in sharp focus Wednesday morning as Randy Mills, mayor of Conyers, and Oz Nesbitt, chairman of the Rockdale County Board of Commissioners, proclaimed Wednesday to be Film Industry Appreciation Day.

The city and county leaders each read a proclamation at e-station on Commercial Street in Olde Town Conyers and presented them to representatives of production companies before a sizeable crowd of local citizens, officials and merchants.

In their proclamations, Mills and Nesbitt each referenced the economic impact the TV and film industry has had in Conyers and Rockdale County. When a production company sets up to film scenes for a movie or television series, crew members patronize local business establishments, dining in restaurants, buying gasoline, staying in hotels and purchasing supplies and equipment for their film project.

“I urge all of our citizens to take this time to celebrate, encourage and thank the film industry for their presence in Conyers and Rockdale County,” the mayor concluded.

Conyers is host to outlets of two of the film industry’s giants, Warner Bros. and 20th Century Fox. The corporate headquarters of both are based in Los Angeles, so funding such major industrial activity in Conyers represents new money flowing into the community.

The two companies have permanent film production sound stages in Conyers, together leasing more than 600,000 square feet and employing more than 600 full-time employees, each with an annual payroll of more than $6 million.

“Conyers is like the little gem,” said Joe McLaughlin, production supervisor for “Sleepy Hollow,” a 20th Century Fox TV series that works out of a large studio on Sigman Road where indoor scenes in the series largely are filmed.

“It’s hard to find 2,000 square feet of studio space,” McLaughlin said. “We have a couple years left on the lease and we’re happy to have it.”

McLaughlin praised Rockdale and Newton counties for having a diverse mix of village, rural, wooded, flat and hilly landscapes for film locations. He said the show shoots often at the Georgia International Horse Park as well as on private properties.

“It’s real specific to our show,” he said.

“It’s great being in a state with a low cost of living and great tax incentives,” said Danny Sconyers, the Conyers location manager for “The Vampire Diaries,” a Warner Bros.-Bonanza Productions TV series that recently finished filming its final season in Covington and Conyers. Sconyers said he currently is working on a new pilot project called “Life Sentence,” which will be filming in Conyers.

Recent and current filming activity in the city and county include movies such as “Selma” and the “Fast and Furious,” network television series such as “The Vampire Diaries,” “The Originals,” “Sleepy Hollow,” “Halt & Catch Fire,” and “MacGyver” and the Netflix streaming television series, “Stranger Things” and “Ozark.”

Wednesday’s event included a tasty reception table supplied with wraps from the Conyers Sandwich Shop, salad fixings from Publix and cupcakes from Cakes and Desserts Cafe.

“The event went well. There were a good many people present from the industry. The feedback I got from the industry representatives is they were very happy and appreciated it,” said Gina Hartsell, film and project manager for the Conyers Rockdale Economic Development Council.